2 police cars, and 1 unmarked car outside our home.

We had just come back from the gym, and I was having a protein shake, when hubby said there are 2 polices cars with flashing lights outside our home.  There was also a Jaguar car with people in it.

The police from one car approached the Jag, and were talking to the lady.  The police in the car behind were watching all the time, and then they got together.  Later a white car stopped, and it had flashing lights on.  The police spoke to each other for awhile, and then the unmarked car left.

This went on for over half an hour.  Another vehicle showed up, and the people from the Jag apart from the driver, just into it.  The police were doing lots of paperwork.

Finally a tow truck came, and drove the Jag onto it’s bed.  There was nothing wrong with it from the outside.  We have no idea what happened.  We wondered if the police could be impounding the vehicle.  I really don’t know if drinking/drugs/it was stolen or what happened .  The driver received the paperwork from the police.  To us it seemed serious, with 2 patrol cars, and the unmarked one.  What do you think?  I just pray that everyone is safe, and that it can be sorted out.  There was no other vehicle involved.

The photos were taken from my windows so not that good, but I didn’t want to look nosy. 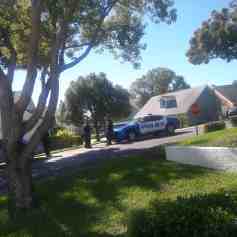 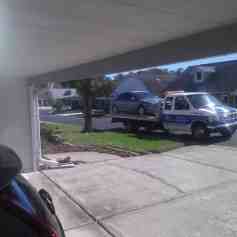 Other neighbors had doors open, and were walking around.

This site uses Akismet to reduce spam. Learn how your comment data is processed.